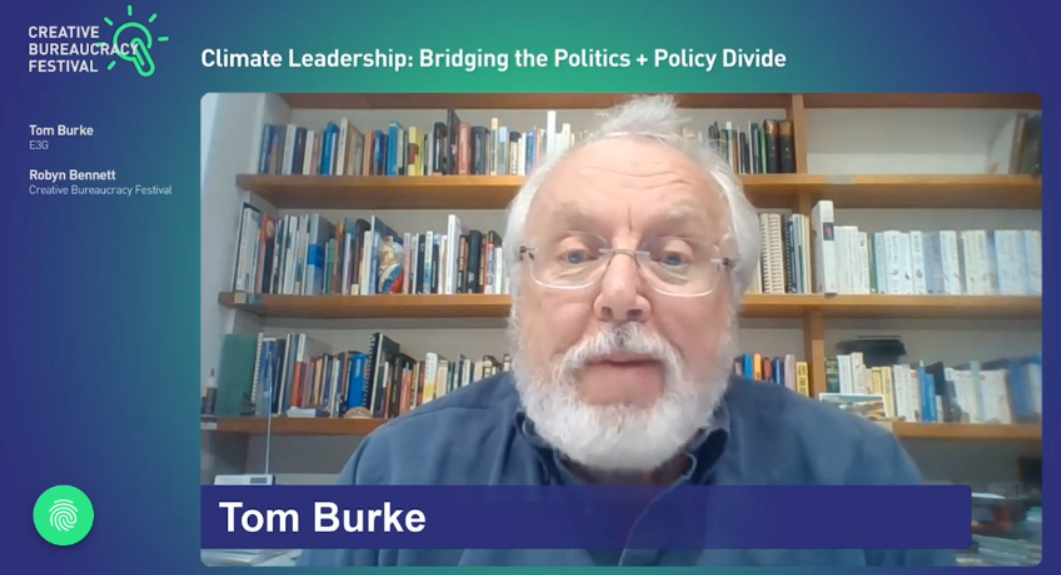 Policy is a map, it’s a route map, it tells you how to get from here to there. There are many different routes, and you can examine them all and try to figure out which ones are the best routes. You use quite sophisticated tool to make a map and then you need to decide which route to use, or maybe you use several of those routes. Politics is the journey, it is how you get you, and everyone that you need to take along with you, from here to there, and you use a completely different set of tools to make the journey. Like on any journey you might use boots, and ropes, and rucksacks and ice axes, and quite often to will have to use them on the people that you are going to bring along on the journey. That is the difference. So to change the politics you need to understand what are the difficulties on the journey that are not the same as the difficulties on the map. I think that difference in discourse is one of the reasons why we are not moving fast enough. We simply don’t understand the political problems as well as we understand the technological and economic problems.

The facts of climate change do get through in the policy realm, but they don’t necessarily mean all that much in the political realm. Most people don’t spend much of their lives dealing with facts as part of their professional activity, they deal with the facts that are relevant to their jobs and they deal with the facts that are relevant to their lives, but they don’t spend much of their lives working out what the fact mean in an issue that seems remote like climate change. So, they lack confidence in their ability, and they are not moved by the facts. They are moved by what people they know say to them, they are moved by who they trust. So, what is lacking in the political realm is that people don’t know who to trust on climate change, and they are not getting much of a consistent and coherent lead from political leaders, and that is true whether you are living in a democracy or an authoritarian regime. The political leaders are not offering up a compelling narrative on climate change, that people believe as a reason for doing things. What we saw with the virus was very interesting, we saw that when people understood what needed to be done, they were very willing to do it. That was a surprise to the people in government who thought that people’s patience with what needed to be done would run out, and they wouldn’t do it for very long, and it turned out to be the exact opposite. The politicians wanted to give up doing things, but the public felt uneasy enough about it that they argued with the politicians that they should go on doing things. So that issue of trust is central to creating the political momentum for change, and without that political momentum it doesn’t matter how good you policy analysis is or how accurate the facts are, they simply don’t get used.

We are primates. What really makes us successful is that we don’t only cooperate with each other, we also compete with each other. We are not going to solve climate change without competition, that drives innovation. We absolutely need that. But if that competition is not inside an envelope of cooperation, then it won’t get us anywhere. We will end up with people fighting rather than working together. What is core to cooperation is trust. We cooperate with people we trust. That is why humanity has done so well. We have mostly, despite lots of ups and downs, managed to keep our competitive instincts inside an envelope of cooperation. The institutions that we have built up are like repositories of that trust, they are where we bank the experience we have of the benefits of cooperation exceeding competition. But what we have seen over the last thirty or forty years is a real drive to get competition to get outside of the envelope of cooperation. This is not just a problem for climate change, it is a problem for a whole range of other issues as well. We are simply not investing enough in the institutions that maintain that bank of trust that we need in order to cooperate.

In order to maintain these institutions or develop them further, we need political leaders who understand the value of them. The reason we build the UN system, and the reason we built the EU, is that people really did not want to repeat the experience of the first half of the twentieth century. Which was a pretty unpleasant experience for everybody, all over the world. We can’t afford to do that with climate change. Those institutions of democracy are a piece of that history, and we tend to forget that. We tend to lose the memory of those things. What hold us together and keeps that memory alive is political leadership. Political leaders are what keep us investing in those institutions. Quite frankly, we have had a very considerable diminution in the quality of political leadership. Partly, that is because we are still in Britain, and in much of Europe and the west, organizing out politics around a left right axis, which has collapsed as an axis of choice. We need to start thinking much more about an axis of choice between those people who want to keep things as they are now, and those people who understand that if we don’t build a better future then the climate will shape the future for us, and we won’t like it. So, we need a different axis of choice in politics and that will throw up different types of leaders.

The reason that we need democracy to deal with climate change, is because in order to stay in power despots have to destroy all of the machinery that we have built up to learn from our mistakes: independent judiciary, free press, all of the institutions that are features of democracy have to be destroyed. There is no mistake free way to a safe climate. You can’t have democracy without the rule of law. So, what you see with authoritarians is that they tend to destroy the rule of law. You can’t have the rule of law without social cohesion. You need to have a society that can learn from its mistakes. The coalitions that built left and right politics, the coalitions that supported left and right, in a sense, have collapsed. We, more or less, have understood that you need to have a mixture of state and markets to deliver prosperity and security. So, we need a new axis of choice, and that is whether we build a future that we can live with, or whether we try to hang on to the present and get defeated by a changing climate. You need to build that from the bottom up, you can’t impose that from the top down. There is a lot of stuff happening in around the world where people are just getting together in their communities and doing what they can do about climate change, and it is building out of that base and understanding that solving climate change is a tremendous driver to building a different type of politics.

These are some excerpts of a discussion for the Creative Bureaucracy Festival. The full discussion can be watched here: