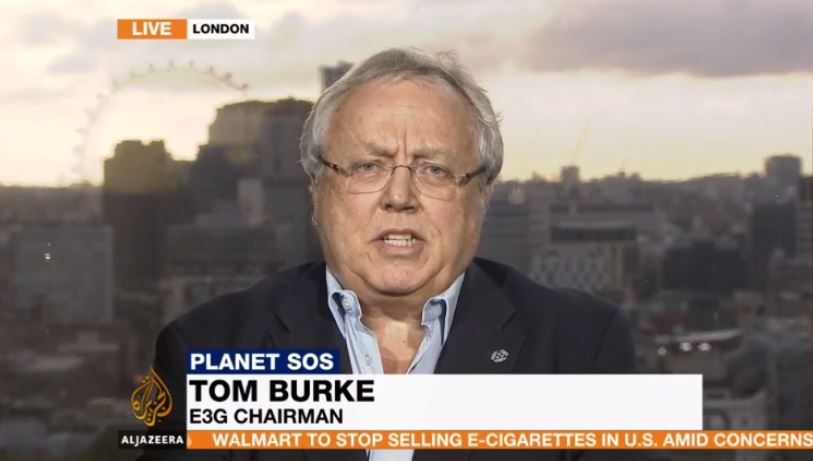 Here are some excerpts from the interview with Al Jazeera, about the record temperatures that we have experienced over the last five years, and the fact that climate change is happening faster that we thought:

What the WMO are saying publicly, is what climate scientists have been saying privately for some time, which is that climate is turning out to be more sensitive to inputs of greenhouse gases than we previously thought, and that means that the urgency of dealing with the problem is growing faster, and they are also saying that the rest of the earth’s system is responding faster, so the impact of a changing climate on human beings is not only occurring quicker than they thought, but it is also nastier than they thought.

I don’t think that the scientists are saying, yet, that these are expressions of a shift in a tipping point in the way that the climate system is working, but clearly the idea of all this happening and the melt-sensitive, means that those tipping points are coming closer. I think that the danger is growing, and it means that we have much less time to solve the problem than we thought we had. Basically if we want to tackle climate change, and stay within the Paris Agreement, we have to stop burning fossil fuels. We now may have to do that somewhat sooner than the middle of the century.
The targets set at the Paris Agreement are definitely not enough to keep the climate safe. It was the best that could be achieved at the time. I think that the secretary general has called this summit to say we have got to do more, and we have got to commit to doing more. The sixty countries that are going to be speaking at this summit, are countries that have said that they are at least willing to think about doing more.

I think that it is important to not just focus on what governments are doing, because that could make you very gloomy. The fact is, we are seeing a much more rapid fall in the cost of renewables and storage than we had anticipated. So the cost of dealing with climate change is going down, and we are deploying those technologies faster than we thought we might be able to.