This piece first appeared in The Guardian on Thursday 10th July 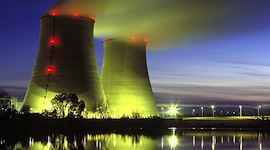 It has always been difficult to see what was attractive about the proposed deal with EDF to build a nuclear reactor at Hinkley Point in Somerset. To bring this off the Government is offering to sell 35 years of index linked tax receipts to the French government to buy electricity at twice its current price.

This is a very big bet on the ability of EDF to build a reactor on time and to budget – a feat they have never accomplished with the reactor type we are buying. It is an even bigger bet on the price of electricity doubling. If it fails to do so then the Government will have to pay EDF even more subsidy.

This is because the Government has guaranteed the price that EDF will receive for all the electricity it produces. It has set this at £92.50. If EDF can only sell Hinkley’s electricity at less than this the Government makes up the difference from a levy on consumers, effectively a tax.

This creates a paradox. The Government is keen to keep electricity prices low to reduce household bills and improve industry’s competitiveness. But if this policy succeeds it will have to pay even more subsidy to EDF from its nuclear tax.

This makes the recent report by Moody’s very bad news indeed for DECC. Wholesale electricity prices have fallen ‘over 40%’ since 2011. They expect power prices to remain this low until at least 2020. Moody’s attribute the price fall to rising renewable output and falling demand.

Thanks to Russia’s intervention in the Ukraine the downward pressure on demand is likely to accelerate. The Commission’s proposal to set a Europe wide energy efficiency target of a 27% reduction by 2030 is widely seen as unambitious. Many voices are now suggesting 41% as an achievable and cost-effective target. That would reduce Europe’s dependence on Russian gas by about 80% and easily pay for the necessary investment by the efficiency saving.

Nor is there any sign that the momentum driving renewables is slowing. Renewable capacity, mainly solar and onshore wind, is now over 290GW in Europe. This is an increase of some 85GW since 2009 and equivalent to the capacity of 300 of Europe’s nuclear power stations.

This is an average of about 21GW of new capacity a year. Even if you divide that by a third to allow for the variable output of renewables, you are still adding 7GW of dispatchable electricity a year. This compares rather well with the decade or more it would take to generate that much power from new nuclear power stations in Britain.

These numbers not only make nuclear a very bad economic bet they also make it too slow to make a useful contribution to reducing carbon emissions. A combination of energy efficiency and renewables will reduce carbon pollution faster and more cheaply. If this were not bad enough news for Britain there is more to come.

Moody’s expect German wholesale power prices to stay low at around £25/MWh – half that of the UK. Nordic power prices, excluding Finland, will be even lower at about £23/MWh. Both Italy and Spain are also likely to have lower wholesale electricity prices than Britain.

It is hard to see what is clever about a policy that will damage the competitiveness of Britain’s manufacturing industry, slow rather than hasten carbon emissions reduction and force Britain’s electricity consumers to subsidise a French nationalised company. It is a tribute to the compelling power of the nuclear dream that England’s political parties have all bought into the fantasy.