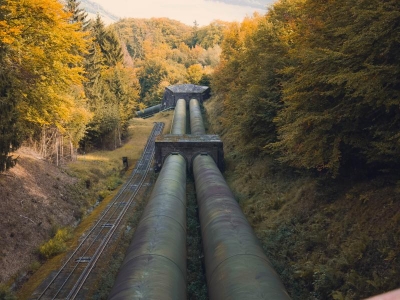 The future will be different. We live in an age of disruptions. Not all of them welcome.

The disruption accompanying climate change is the most unwelcome of all. This was made very clear by extraordinary events of last week.

There has already been a lot of commentary on the Extinction Rebellion protests and all I want to add is that for me they gave us a compelling insight into the depth and breadth of public anxiety about climate change.

Mark Carney’s latest intervention on the issue received rather less attention but was in many ways much more significant. He pointed out that banks that did not learn how to manage their climate risk could cease to exist.

The energy transition is being driven by two converging forces, climate change and digitalisation.

It is increasingly clear that the impact of carbon on the climate is both faster and nastier than we thought Digitalisation is disrupting the electricity utilities business models at an accelerating pace.

This convergence signals a diminishing role for gas in the energy future The technological and political headwinds for gas have been building for some time and are only going to accelerate.

Greta Thunberg has become the best known female teenager since Juliet. Her core message is that it is time to panic about what is happening to the climate. Actually, climate scientists have been doing just that for some time.

We have already established the goal of a successful climate policy: keeping the rise in global temperature to below 2°C. We also know what this means for the energy system. We must stop burning fossil fuels by mid-century.

If you believe the IEA, the EIA and every oil and gas company forecast on the planet that is not going to happen.

There are no unscalable technological or economic barriers to climate policy success, but I accept that the politics are really difficult.

Nevertheless, the pressure on Governments to act is going to grow further, and possibly faster, as events drive up concern about climate risk not only with the public and scientists but increasingly with central bankers and the military.

So let me finish by identifying a few of the mounting headwinds the gas industry will face.

Governments will do more to get both bills and emissions down by driving energy efficiency up. In the past decade even the British Government’s desultory efforts at energy efficiency cut energy demand over 30% below forecast while population and the economy continued to grow.

A serious effort on energy efficiency in the UK will be a direct attack on growth for gas for heat.

Investors will bet on renewables and batteries for storage whose costs will continue to fall rapidly and continue to attack growth for gas for power.

Digitalisation will continue to shift the focus of electricity markets from technology choice to system design and so prioritise flexibility and service quality over commodity volume.

This means that EV driven demand will not rescue the future for gas.

This may be a gloomy view of the future for the gas industry but not so much for everyone else.