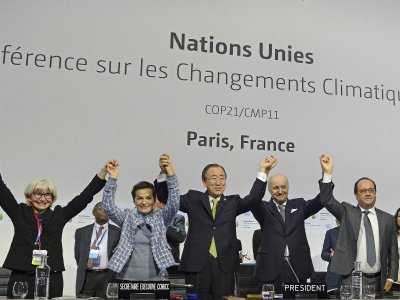 Concerted EU diplomacy helped secure a landmark agreement at the Paris climate change summit. We should not leave the field just as the battle is turning.

Our security and prosperity depend on a successful response to climate change, the most urgent challenge of our time. So does any prospect of a transition to a way of living together that is just and sustainable. And if we fail on climate, we lose the very capacity to shape our destiny that makes sovereignty worth having.

Today’s European Union is, yes, tired, damaged and in need of reform. But without the EU the climate struggle would have been lost already.

It was almost lost at Copenhagen in 2009. But European nations had the vision to stick to the commitments they had put on the table. Acting in concert they avoided a race to the bottom between member states. Europe’s example strengthened the hand of those in Asia, Africa and the Americas who wanted their own countries to do more. European diplomacy helped forge the global coalition that in Paris last year finally forced ajar the door to a post-fossil age. And throughout, European social movements have mobilised across borders to keep governments honest.

The UK was at the forefront of these efforts. Far from undermining our sovereignty, our membership of the EU made it possible to secure our national interest.

Paris was merely the end of the beginning. Those who cling to an energy future based on coal, oil and gas will now fight all the harder to protect the value of their assets. Just when we need a redoubling of effort, Brexit would gravely weaken Europe’s capacity to act on climate. And its consequences in the UK would be calamitous.

Brexit would leave the field clear for those on the right who always hated the idea that by intervening in the economy for the public good we should build an energy system that is clean, efficient, decentralised and driven by the needs of households and communities, not overbearing private corporations.

They would demand the repeal of the Climate Change Act, the dismantling of the Department of Energy and Climate Change, a new dash for gas with even more fracking than is currently in prospect, and the removal of any remaining measures to encourage renewables, energy efficiency and community energy. The record of the leading Brexiters, in whose image a post-referendum government would be shaped, offers no reassurance that they would resist any of this.

This referendum may feel like a Hobson’s choice between rival factions of a self-absorbed establishment, each equally out of touch with how most of us live our lives. Neither faction has much to say about who we are, or about what kind of country we should be trying to build, let alone how to deal with climate change.

But in reality the choice between remain or leave will be as momentous as any we will ever have to make. Those who say this is a choice about democracy are right. We have an electoral system that, far from bringing us together, now widens the divisions in a country too divided already. Our ruling Conservative party, catapulted into office to its own astonishment by fewer than a quarter of eligible voters, is busy dismantling our public realm, while doing its best to rein in our civil society, our trade unions, dissident local authorities and anyone else who might have the audacity to challenge their profoundly antidemocratic project. Even, irony of ironies, our unelected House of Lords.

Our democracy is indeed broken. But it is we who have broken it, not the EU.

Those who say this is a choice about sovereignty are right. The same establishment that talks down to us about the EU from its entrenchments across politics, the media and business fell in thrall long ago to the illusion that markets not people know best; that no public authority, only business, can be trusted to interpret the will of the market; and that the market should never be thwarted in pursuit of the public good.

The market is like fire. It can serve us well if we control it. Otherwise it consumes everything in its path. The crash of 2008 was an invitation to build a better fireplace. But as soon as the fire was brought back under control, those who lead us have chosen instead to keep pouring petrol on it.

Our sovereignty is indeed compromised. But it is we who have compromised it. We surrendered it not to the EU but to a market cult whose high priests are to be found not in Berlin, Paris, Madrid, Rome, Warsaw or Brussels but rather closer to home.

We can win our democracy back. But to win it we must work with democratic forces across Europe, not cut ourselves off from them by leaving the EU.

We can win our sovereignty back. But to win it we must escort the high priests of the market cult from their citadels here at home, not strengthen their hold by leaving the EU.

We need to believe in our democracy and our sovereignty if we are to win the climate struggle. We need to play our part in building an unstoppable coalition of like-minded forces across our continent, as we have in halting (for now) the ill-conceived TTIP trade deal.

If we can do that we will inspire a new generation of Europeans, and reawaken a European project we all now need more than ever in a world more dangerous even than it was 60 years ago.

We should opt for hope by voting to remain.

This article was first published in The Guardian