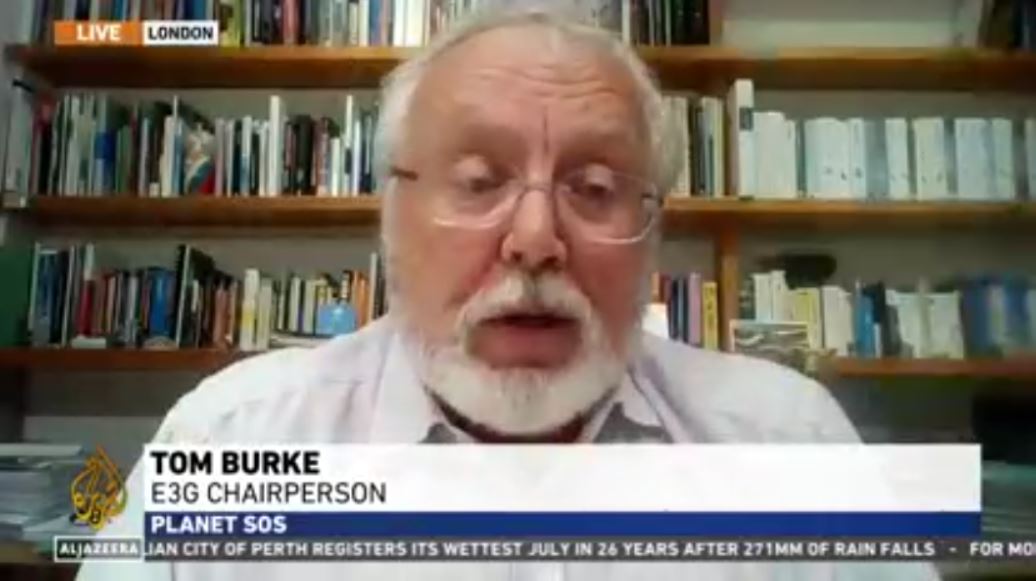 These extreme weather events could become a lot more volatile and deadly. We are now experiencing the effects of a rise in global average temperatures of about 1.2 Degrees. If we don’t stop burning fossil fuels, then by the middle of the century, we will be living in a world that is well over 2 degrees, and if we continue to burn fossil fuels beyond that point, the world will continue getting hotter and the kind of phenomena that we are seeing, which is unprecedented, but not completely unexpected phenomena, that are going on all over the world, will just become more and more intense and the disruption to people’s daily lives will get more and more acute. We will see more of the pictures that we have been seeing in the media.

These events are not unexpected because we’ve been hearing exactly what might happen from the climate scientists for at least the last 35 or 40 years. What we are seeing now is what they told us 30 years ago would happen if we didn’t take urgent action to keep greenhouse gases out of the atmosphere, and exactly as they forecast we’re seeing the rise in temperature but what is even more alarming, is the temperature is pretty much exactly rising as they have suggested it would, and as the models said it would. But the impacts of that on our lives are much greater, and more dramatic than they originally anticipated. So these affects are going to get more unprecedented, but they are certainly not something we didn’t know was coming.

We are not prepared for the consequences of this unprecedented extreme weather that is likely to get worse. We are not investing enough in two things, the most urgent priorities to invest in: decarbonizing our energy system so that we don’t go on making the problem worse. But climate change is happening now. It’s not something for the future, and so we also have to invest in upgrading our infrastructure everywhere, so that we can cope with the impacts that we are already experiencing. That means investing more, for instance, in managing dry lands and forest lands, that have become more vulnerable to fires. It means investing more in the water system, so that people can retain access to water, both in our cities, but also in our agricultural areas, or we won’t be able to grow food. We need to do an enormous amount to increase the resilience we have to these increasingly shocking events, at the same time as we have to invest in stopping burning fossil fuels.

Rising temperatures feed through into very different conditions, depending on where you are in the world, whether it be very dry conditions in one place for heavy rainfall elsewhere. It is a very complex system that we are perturbing by adding greenhouse gases to the atmosphere. What the scientist told us 30 years ago was, it was likely that if we went on doing that, we would make wet areas wetter and dry areas drier, that is a very brief summary of some very complicated science, but that’s essentially what we are seeing. As that air warms up, and as a sea warms up, we are seeing changes in the way weather is constructed. As ice melts it changes the way in which temperatures are distributed around the world, and that’s what drives our weather. The differences in temperature between the equator in the pole, for instance, is a very important driver of our weather. If you change that temperature balance you change the distribution of things like floods and droughts, fires and heat, all the things we are seeing right now.

There is a widespread acceptance that these conditions have been caused or at least exacerbated by human-induced climate change. It is certainly true amongst populations, wherever in the world you take an opinion poll, you find that the public is alert to and aware of the problem and want something done about it. Politicians have been slower. But what we have begun to see recently is pretty much across the board. Politicians are beginning to sign up to a commitment to get the world’s energy system to net zero by 2050. Signing up and making a promise is something politicians are very good at doing. But doing the things that actually make a difference, they are rather less good at doing. We are not seeing the kind of action from politicians that we need to see if we are going to address these problems successfully.

These are excerpts of an interview for Al Jazeera. The full interview can be seen here: