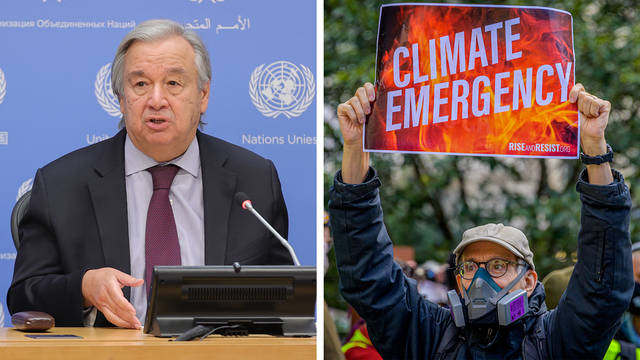 There are quite a small number of big things, like changing the transport system, and changing the energy system, where we need the state and business together to do big things for us. But there are a huge number of small things, none of which on its own makes a big difference, but if we all do them together they make an enormous difference. We need to bring the big things and the small things together in order to really solve the problem. You can’t put the government against the people, or the other way around. The idea of hectoring people into behaving better is not a very good approach. You need to bring out the creative in people. We have seen throughout the virus, in all sorts of ways, just how creative people can be when a challenge is put in front of them.

There are some things that only the government can do. But what has been really interesting, over the course of the last two or three years, is the extent to which the investors have begun to see this as a risk issue, not a responsibility issue. So now they are now playing a much bigger part particularly in driving forward the opportunities side of this. They are investing. That’s why the renewables cost has come down so rapidly, because the capital markets are now starting to see lots of opportunity. Some of this that can only be done if people work together, local government has a really big role to play here, and we underestimate the role that local government can play in mobilizing and helping people to do more for themselves.

We tend to think of innovation in this areas as being about technology, but actually one of the big barriers to people playing the part that they could play, is the upfront cost of doing things that they need to do in their own homes. That’s where financial innovation could make a real difference, and if we set up the kind of infrastructure bank that the government has been talking about, then we would be in a position to really ease the paths to a lot of these ideas, by allowing people to pay back over a long period of time, as they do with a mortgage, from the savings on their energy bills, for things that help us to decarbonize our economy. We need some financial innovation as well as technological innovation.

Countries like Mozambique or Egypt whose only real resource endowment is gas. It’s hard to see what else they have got to use. We have got to do more, not so much for their energy policy, but to help them make the transition economically. What is true both in this country and in the rest of the world: this won’t work if it’s unfair. So it has got to be fair to engage people in this country, and it has got to be fair to engage countries around the world in making it work. I think we need to do a better job of helping some of those countries, where their resource endowment is fossil fuels, with how to make the transition. But we don’t need to help countries like Russia make the transition. Russia has an economy that is very dependent of fossil fuels, but it’s also wealthy enough and technically competent enough to make that transition itself, the same as Saudi Arabia. We need to focus our attention on those places that really need help, and be prepared to help them. That’s why it’s a shame that we cut back on our commitment to overseas aid, because that did put Britain in a leading position to make sure that the rest of the world was able, as well as willing, to follow us.

We are not going to solve this problem without effective profit-making businesses, we really aren’t. They are where innovation comes from, and if you are going to deliver solutions, business has got to do it. But business can’t do it if it is not given the right framework of policy by government.

These are some excerpts from a panel discussion about climate change that I was part of on LBC.
You can listen to the full interview here: