This piece was first published by Friends Of The Earth here 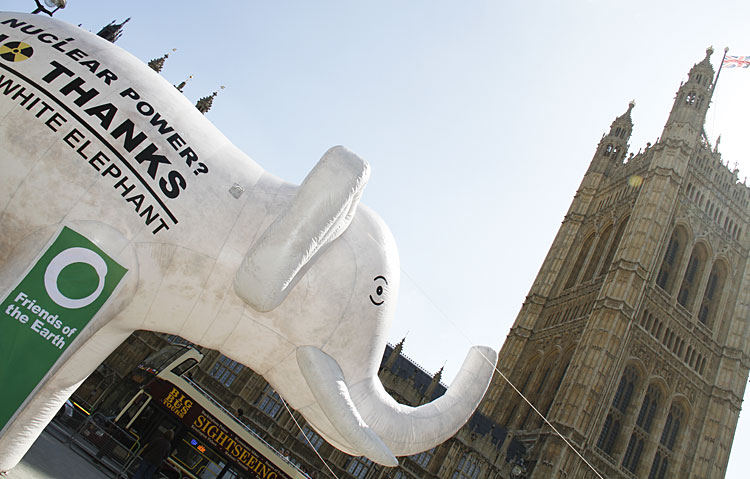 On a very cold morning forty years ago I got into a bright red Mini outside the FoE offices in Poland Street. Together with John Price, an Australian physics PhD, I was about to set off on a nationwide tour of the FoE local groups. Our goal was to run a series of teach-ins and public meetings on nuclear power.

The first oil price hike had only recently taken place. There was much anxiety that the world was running out of oil. This prompted a lot of governments to begin massive, heavily subsidised programmes of nuclear power. ‘Limits to Growth’ had just been published and there were many environmentalists who thought nuclear might be the answer to the oil resources running out.

Our task was to explain to the public and the FoE local groups why this wasn’t so. Then, as now, we had four arguments. Nuclear was too expensive, it was not safe; it would lead to the proliferation of nuclear weapons and would leave behind unmanageable radioactive waste. In short, there were cheaper, cleaner and safer ways to meet our energy demand.

As events transpired, we were right then as FoE is now and, as later, it proved to be about Thorp. In 1979, Walt Paterson wrote a long article for the Journal of the Institute of Nuclear Engineering. It traced the history of FoE’s central role in igniting the public debate about nuclear power in the Britain from 1973 onwards. It documented the extensive evidence base that FoE produced to support its position.

Nowhere in that evidence base will you find any objection to nuclear power ‘in principle’. This particular campaign was an expression of the founding principles of FoE. One of those principles is that whatever our ethical motivation for a campaign, the policies we proposed should be based on solid evidence. Another, was to pick specific issues on which to campaign that focussed attention on wider issues.

Among the most successful of FoE’s early campaigns was the whale campaign. Much as FoE cared about whales, the point of the campaign was to dramatise the wider need to preserve all endangered species. If you couldn’t save the whale, what could you save? Similarly, the focus on nuclear power was not just on the choice of technology but on the wider issue of what kind of energy policy was best for the environment.

So, does it matter that a slipshod piece of journalism got FoE’s position wrong on the BBC? I think it does but not because whether FoE is arguing about safety or economics matters. It has, and hopefully will continue, to argue both. And when it is appropriate and fits the media’s fickle attention, I hope FoE will add the rest of the compelling suite of arguments about why nuclear power is a distraction.

Harrabin’s sloppiness with the truth matters for a far more strategic reason. FoE, along with the rest of the environmental community, is widely trusted by the public. Trusted far more than journalists or politicians. This trust has been built up by generations of FoE staff and activists over forty years. The source of that trust has been FoE’s commitment to basing its policy on sound evidence.

FoE is, in principle, committed to protecting the environment. It is also, in principle, committed to opposing anything which is in its judgment, damaging to the environment. But those judgments are based on the best evidence it can assemble. Those judgements, like any judgements, are subject to change as circumstances change. But the whole point of principles is that they do not change with circumstances.

To describe FoE’s opposition to nuclear as ‘in principle’ is to attack the basis on which public trust in FoE has been built. That is to suggest that there can never be any evidence that would change the judgement that nuclear power is bad for the environment. The public, quite rightly, does not trust anyone who believes they cannot make a mistake. Opposing nuclear power in principle would be to assert infallibility and would be deservedly distrusted.

Furthermore, the public understands principles. They are things you stick to even when the going gets tough. To change your principles as the winds of opinion change is to show moral cowardice. For Harrabin to accuse FoE of changing its principles is to further attack the basis on which FoE’s trust asset is built.

So Harrabin was wrong on two counts. FoE has never opposed nuclear, nor as far as I know, any other technology on principle. Nor has FoE ever changed the principles it does have to suit the headlines. As this century progresses the forces we have long opposed will work harder to weaken us. It will be ever more important to know what our principles really are and to protect them and the public trust that we built standing up for them from attack whether motivated by carelessness or malevolence.