The Letter referred to in this article is the one that Jonathon Porritt, Tony Juniper, Charles Secrett and I wrote to David Cameron, highlighting the key economic and political issues with pursuing a pro-nuclear power policy. See the original post here 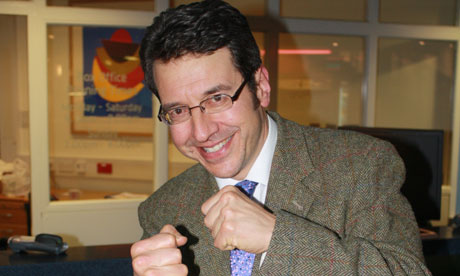 I really look forward to reading George Monbiot’s articles in The Guardian on Tuesday. I know of nobody who ‘nails it’ more often than George – just check out the most recent article on his website www.monbiot.com about the “global bullshit industry” that is marketing today.

So it really pains me that the nuclear industry is able to summon up his pro-nuclear advocacy as one of the strongest shots in their rapidly emptying locker. And even though he is still out there as the man who ‘fell in love’ with nuclear power at the time of the Fukushima disaster, I can’t help but notice that he may be having second thoughts.
The headline for his Guardian article on October 22 was a simple one: “The Farce of Hinkley C will Haunt Britain for Decades”.

It turns out that even George Monbiot is opposed to the Government’s plans to build two new nuclear reactors at Hinkley Point in Somerset. That won’t exactly have EDF quaking in their lead-lined boots, but it must piss them off just a little.

It’s worth analysing this change of heart in a more detail, based on that article. And whilst keen to avoid any hint of ‘told you so’, it may be helpful to compare his newly-minted objections to Hinkley Point with the letter that myself, Tom Burke, Tony Juniper and Charles Secrett (as former Directors of Friends of the Earth) wrote to the Prime Minister back in March 2012

GM: “We should not accept nuclear power at any cost. And at Hinkley Point, the cost is too high.”

While George was weighing up in his mind some time ago whether to go with nuclear or not, he apparently reviewed all the available cost estimates for nuclear – and not one of them was as high as it now seems that the cost of Hinkley Point will be. George is apparently very surprised at this. No-one else is.

So how high is ‘too high’ for George? You might enjoy extracts of the preliminary analysis of the Hinkley Point deal carried out by City experts, Liberum Capital:

“As far as we can see, at £8bn per reactor, this makes Hinkley Point the most expensive power station in the world (excluding hydro schemes) on a per MW basis. By way of contrast, for the cost of £16bn for the 3,200 MW to be built, the UK could build 27,000 MW of new gas-fired power stations, solving the ‘energy crunch’ for a generation.”

“EDF will not be able to finance new nuclear in Britain on its own balance sheet. It will be relying on at least an implicit guarantee from the French and UK Governments to lower its cost of capital. If this is not forthcoming, raising the £25 billion that will be needed for Hinkley and Sizewell will prove very difficult. Indeed, many independent commentators in the City are already deeply sceptical.”

(Incidentally, that figure would now be £32 billion, not £25 billion for both Hinkley and Sizewell)

GM: “This deal looks as bad as any Private Finance Initiative contract.”
In other words, we’re all going to be screwed by EDF, who have persuaded the Treasury that the deal should be ‘fully indexed to the Consumer Prices Index’.

Beyond that, and even more astonishingly, the deal-breaker on finances will be the two Chinese nuclear companies that have joined forces with EDF to construct the two reactors at Hinkley Point. EDF on its own is a busted flush, with huge debts and a chronically exposed balance sheet. It therefore had no choice but to do the deal with the Chinese companies. They’re in it to get a toe-hold in Europe’s moribund nuclear marketplace, but they won’t pay too high a price for that speculative position. So it’s still possible that nothing will actually happen here at all.

“The UK is taking a massive bet that fossil fuel prices will be extremely high in the future. If that bet proves to be wrong then this contract will look economically insane when Hinkley Point is commissioned. We are frankly staggered that the UK Government thinks it was appropriate to take such a bet.

Especially if the European Commission rules that this unprecedented level of subsidy for EDF breaches its state aid rules. Commissioner Almunia has just announced that he will be carrying out a detailed examination of the deal, and though it’s clear that France and the UK will be pleading for this to be seen as a special case, there are many other countries (including Germany and Austria) that will not be prepared to go along with an outright breach of the rules.

Here’s what we said to the Prime Minister in March 2012:

“The path to nuclear new build in Britain will be much harder and more expensive than the Government has yet recognised. It will be hard to explain why we are buying a reactor type that France itself is abandoning. Nor is there a plausible, let alone compelling case that this is necessary for security of supply. Furthermore, there is growing risk of policy failure due to the decisions of others and constraints on our ability to meet investor expectations. The biggest risk is that EDF will prevaricate, continue to delay the investment decision, while repeating its promises in order to negotiate a more favourable shift of risk to us. Meanwhile, we would be deterred from moving ahead more aggressively on our efforts to reduce electricity demand and other measures to drive down electricity bills.”

GM: “A fundamental principle of all development is that we should know how the story ends. In this case, no-one has the faintest idea. No-one should commission a mess without a plan for clearing it up.”

Yes, George, spot on. As we’ve been pointing out ever since we started up our campaign against any kind of renaissance in the UK nuclear industry.

Now there’s a surprise! Here’s what we said to the Prime Minister in our letter back in 2012:

“Current experience with the European Pressurised Reactor (EPR) led François Rousseley, the former head of EDF, to recommend that the EPR be abandoned. This advice was endorsed by a recent report from the French National Audit Office which also found the EPR to be too complex and too expensive. This will intensify EDF’s desire to transfer most of the construction risk for British EPRs to British taxpayers and consumers”.

In truth, all of these things were crystal clear well before the Fukushima disaster. Since then, they have all become even more compelling reasons to reject the nuclear option.

So is George about to change his mind all over again? I’m not sure.

His pro-nuclear love affair could just going through a bit of a rocky patch. Nothing that can’t be sorted out by conjuring up a couple of new ‘white elephants’ out of his nuclear hat. In his article, he revealed how bedazzled he now is by “the promise of integral fast reactors and liquid fluoride thorium reactors.”

Don’t they just sound absolutely amazing! Try saying that out loud to see if you too feel a little frisson of sub-sexual arousal!

I’ll return at a later date to explain the full extent of wishful thinking on the part of anyone in putting their eggs into those two nuclear baskets. Suffice it to say for now that there’s not the remotest possibility of either option producing a single electron by 2025 at the earliest – which is roughly when Hinkley Point is scheduled to come on stream.

And by 2025, almost all renewables will have been enjoying a decade of reducing costs and increasing efficiencies.

So what does George suppose he’s still up to? What a massive intellectual price there is to be paid to keep those nuclear dreams intact.