What the government needs to do to rescue the Green Deal 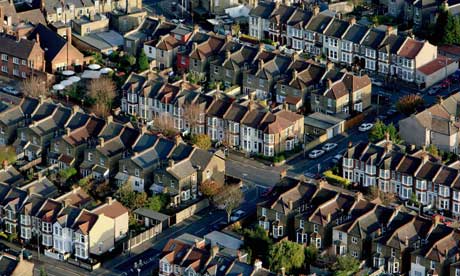 An excerpt from a report written by Nicholas Schoon on behalf of BioRegional and The Association for the Conservation of Energy.

Incentives for retrofits and closing the Green Deal funding gap

1. Government needs to guarantee Green Deal loans so as to reduce the APR to below 4%.

2. Government should assess variable stamp duty and Green Deal grants as incentives for household retrofits, then deploy one or both of these for at least three years.

3. Government should explore the potential for a street-level Green Deal incentive, administered by local councils, aimed at encouraging groups of neighbours to club together in commissioning Green Deal retrofits for their homes.

4. Green Deal incentives along the lines we propose strengthen the case for ‘consequential improvements’ measures in the Building Regulations. This means that if approval is sought for any alteration or extension which would increase a home’s energy demand, then its overall energy efficiency must be improved so as to offset this increase. Home improvements, along with house purchases, are the most important opportunity points for householders to make major energy saving retrofits. Consequential improvements should be brought into the Building Regulations once a Green Deal incentive is deployed.

Bringing more small traders and SMEs into the Green Deal.

5. Accredited Green Deal Installers should be able to offer unfinanced (or self-financed) Green Deal packages to households without a Green Deal provider being involved, provided appropriate safeguards are introduced.

6. The Department of Energy and Climate Change should commission research aimed at gaining a better fix on the typical energy savings actually achieved by the various Green Deal measures, in kilowatt hour, carbon and money terms. This should then feed into improvements in the modelling and methodology used to makes savings estimates in Green Deal assessments.

7. A long-term supply of free assessments should be offered to householders, lasting at least three years and capped in the region of one million assessments a year. This offer should be focused on households that are most likely to benefit from a Green Deal package and most likely to take one out.

8. The Energy Performance Certificate and the Green Deal Occupancy Assessment Advice Report need to be restructured and rewritten so as to align more closely with each other, with clear and simple messages about their purpose and the differences between them. The explanation of ‘actual’ versus ‘typical’ estimated savings should be improved, with clearer messages about the likely accuracy of these estimates and what factors determine whether they will be realised.

9. To further improve the accuracy, reliability and credibility of Green Deal assessments:

• DECC should commission research on an adequate sample of Green Deal assessments, to determine their accuracy and share information on the most common errors and how to eliminate them.

• If necessary, it should revise the Green Deal Code of Practice to ensure errors in assessment reports are swiftly rectified – by carrying out a second assessment if need be.

• The typical costs of recommended measures used in all assessment reports should be updated annually.